A 70-year-old man has been left with an ‘eyesore’ in his front garden for three months – thanks to a Yodel delivery driver knocking down his wall. 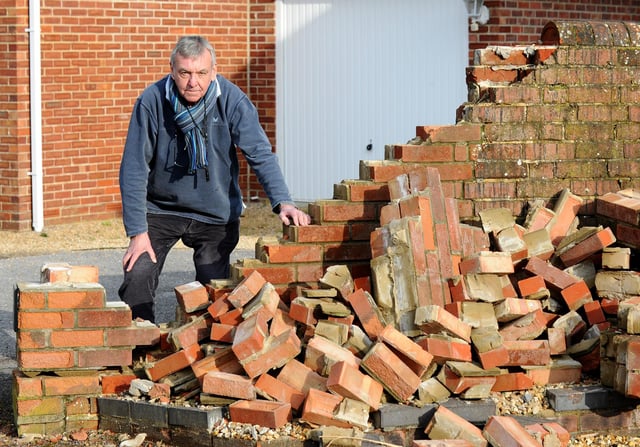 Peter Shepherd, the chief executive of a logistics company, was returning from the shops when he witnessed the driver hit his garden wall on Monday December 23.

A 6ft length of the wall collapsed ‘straight away’ – as the Yodel van drove away.

The 70-year-old visited the Segensworth branch of the delivery company, where he was told the company would arrange for the wall to be repaired.

Peter said: ‘I saw the driver hit the wall - it collapsed straight away.’

‘Accidents do happen but he deliberately drove off.

‘I didn’t think to report it to the police, but went to the local branch the next day, where a manager accepted liability.’

But the wall has remained down for more than three months – with the delivery company sending a building firm to visit the property four times since December. But each time the builders have said they needed more material or better conditions to undertake the repairs.


Peter said: ‘I have spent a lot of time sorting this out.

‘It has caused lot of stress, as to what is going to happen and being left with this mess to clear up.


‘We have not moved any of the brickwork but need to do so shortly so no-one trips over this walking down the lane in the dark.

‘I have tried emailing and calling (Yodel) – I just get through to a call centre in South Africa.

‘The service has been dreadful.’


If Peter decided to take matters into his own hands, he could face paying hundreds of pounds to fix the damage, with another building firm giving him a quote of £1,700.

He added: ‘I’m good at logistics – but useless at rebuilding walls.’

The driver was delivering a package of wine to Peter’s neighbours, but the incident has not soured their relationship.


‘But my neighbour is happy for me to take charge.’