WARNING: GRAPHIC CONTENT. A man has been filmed throwing a wheelie bin at a dog after it launched a vicious attack on a postman.

Footage taken from inside a car driving along the Detroit street in Michigan on Friday shows the dog locking onto the mail carrier’s ankle as he lies in the ground.

A woman can be seen running out of her home with a broom to try and subdue the animal.

She hits the stick of the broom on the dog’s rear a number of times, but it remains latched on to the postman’s ankle.

A man has been filmed throwing a wheelie bin at a dog to try and stop an attack on a postman.Facebook/ Oneil Colley

The man recording the video from his car then jumps out and disappears from shot, returning with a huge wheelie bin.

Video shows him lift it above his head and slam it down on the dog, but it appears to have little effect and the animal bites the mailman’s hand.

The dog eventually releases its grip on the postman and animal control officers captured it and gave a ticket to the owner.


“From what I know, basically is my cousin was leaving for work and he slipped past him and ran outside,” an anonymous man told Fox2.

The postal worker was taken to hospital and is in a stable condition. 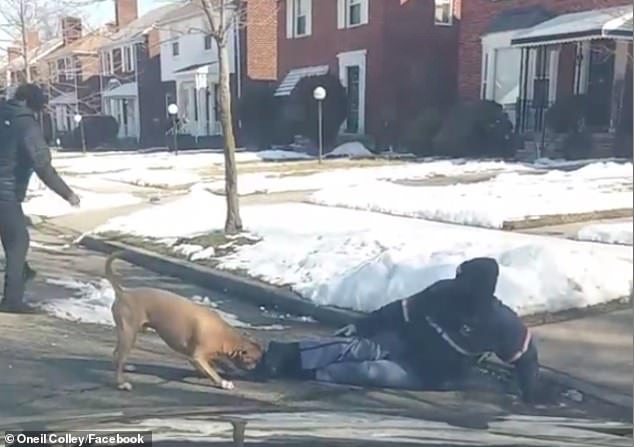