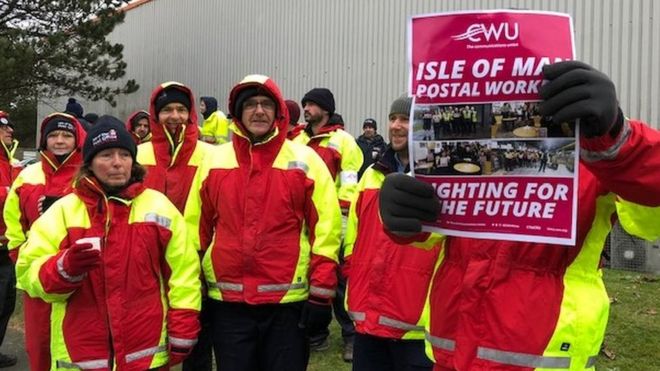 More than 200 Isle of Man postal workers have begun a two-day strike over planned changes to their conditions of employment.

This week, the government backed a series of cost-cutting measures that will end most Saturday letter deliveries.

The Isle of Man Post Office (IOMPO) confirmed talks between the two parties will continue on Thursday.

'First ever loss'
The proposed changes include reduced pension benefits and pay for new starters, and a reduction in postal deliveries in the island.

CWU deputy general secretary Terry Pullinger said: "We would never recommend people going out on strike and losing money at this time of year.

"Postal workers have to pay for Christmas as well. That is a measure of how serious things are."

Bosses have said mail volumes have halved in the past 10 years, while the use of postal services is falling at an average of 7% a year.

Chairman Julie Edge MHK said change was required because the IOMPO is "uncompetitive due to high operational costs".

IOMPO chief executive Simon Kneen said there had been a "genuine effort" from both sides to find a solution on Wednesday.

He added: "We remain committed to working with the CWU to bring this strike to a swift conclusion."

The post office apologised for the disruption and said its "robust contingency measures" would be regularly updated on their website.