The baby of a pregnant woman who was murdered in south London on Saturday has died, police confirmed this morning.

Kelly Mary Fauvrelle, 26, was pronounced dead at the scene but her unborn baby was delivered by emergency services at a house in south London.

The baby boy, called Riley, was taken to hospital but has now sadly died. He was named by relatives who said he had a 50/50 chance of survival.

Ms Fauvrelle was eight months pregnant when she was found with stab wounds at her home in Raymead Avenue, Croydon. Police have released footage of a man they want to identify who was seen walking towards the address at 3.11am. He was then seen running away just over 10 minutes later.

Detective Chief Inspector Mick Norman of the Met’s Homicide and Major Crime Command said: ‘This morning, we heard the sad news that Kelly’s baby son, Riley, has died in hospital. ‘Our thoughts remain with their family. ‘This tragic development makes it even more important that anyone with information comes forward as a matter of urgency.

‘We have released footage as the next step in what has been a fast-paced, and extremely challenging investigation. ‘We need to identify the man shown in the footage urgently, even if only to eliminate him from our inquiries. I need to hear from anyone who knows who he is.’

Two men have been arrested on suspicion of murder. Kelly Mary Fauvrelle died at the scene and her baby was delivered by emergency workers One, aged 37, was released under investigation on Sunday, and a second, aged 29, has been released on bail until early August. The Met Police have said they are keeping an ‘open mind to any motive’ and described it as a ‘horrific incident.’

Ms Fauvrelle’s brother Stephan Alexander Simpson paid tribute on Facebook and said: ‘Words can’t describe the pain we’re feeling. ‘You couldn’t have been a better sister, and I thank you for always being there for me, helping me whenever I needed it. ‘A beautiful person who’s life has been taken from her. I’ll stay strong, you’ll always be in my thoughts, so please keep watching over us. ‘I love you more than you can possibly imagine. Rest in peace Kelly.’

Ms Fauvrelle was eight months pregnant when she died Ms Fauvrelle was a member of the Communication Workers Union (CWU), and worked at the Croydon Delivery office. General secretary of the CWU, Dave Ward, said: ‘Yet another loss of innocent life is utterly sickening. ‘It is clear the gang culture and environment across the UK, but particularly in London, has reached a level where it just cannot go on. ‘The CWU calls for an immediate reversal of police cuts in London and across the UK as an absolute priority and we will link up with other organisations to pressure the Government and Mayor to act now. ‘The streets are not safe any more and this is not the world we should hand over to our children and grandchildren. Enough is enough.’

Ms Fauvrelle’s death is understood to be the 65th murder in the capital this year and one of four to lose her life over the weekend. London Mayor Sadiq Khan tweeted on Saturday: ‘Violence against women has no place in our city, and horrific murders in the home like this show the scale of the problem we face.’ Anyone with information is asked to call the police incident room on 020 8721 4005 or Crimestoppers anonymously on 0800 555111.

A man has been arrested on suspicion of murder after an expectant mother and her unborn child were killed in a stabbing in south London.

The 25-year-old suspect was arrested on Thursday on suspicion of the murder of Kelly-Mary Fauvrelle, 26, and her baby son, Riley, police said.

The Royal Mail worker was eight months pregnant when she was killed in the bedroom of her home in Raymead Avenue, Thornton Heath, in the early hours of 29 June.

Her baby son - who was named Riley by family members after he was delivered by paramedics - died in hospital on 3 July.

A Metropolitan Police statement said: “On Thursday, 11 July detectives investigating the murder of Kelly Mary Fauvrelle and her baby son, Riley, arrested a 25-year-old male on suspicion of murder.

“The male has been taken to a central London police station where he remains at this time. Inquiries continue.”

The attack took place in Ms Fauvrelle’s bedroom while her whole family was at home and relatives heard her screams at about 3.30am.

Two men were previously arrested on suspicion of murder. 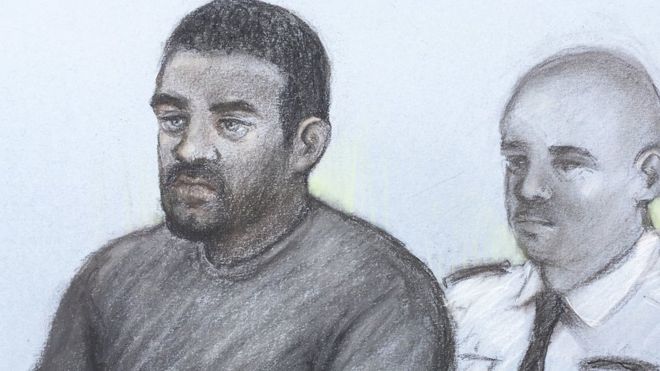 The ex-partner of a heavily pregnant woman stabbed to death in her own home has accepted responsibility for her killing, the Old Bailey has heard.

Aaron McKenzie, 25, is charged with the murder of Kelly Mary Fauvrelle, 26, who was eight months pregnant.

He is also accused of the manslaughter of her baby, Riley, who was delivered at the scene but died in hospital four days later.

Mr McKenzie is also charged with possession of an offensive weapon.

A plea hearing was set for 2 October with a provisional trial date of 2 December.

Mr McKenzie, from Peckham, south London, was remanded into custody.

Royal Mail worker Ms Fauvrelle was attacked in her bedroom on the ground floor of the family home in Thornton Heath on 29 June.

Her mother, two brothers, sister and her sister's baby son were all in the house.