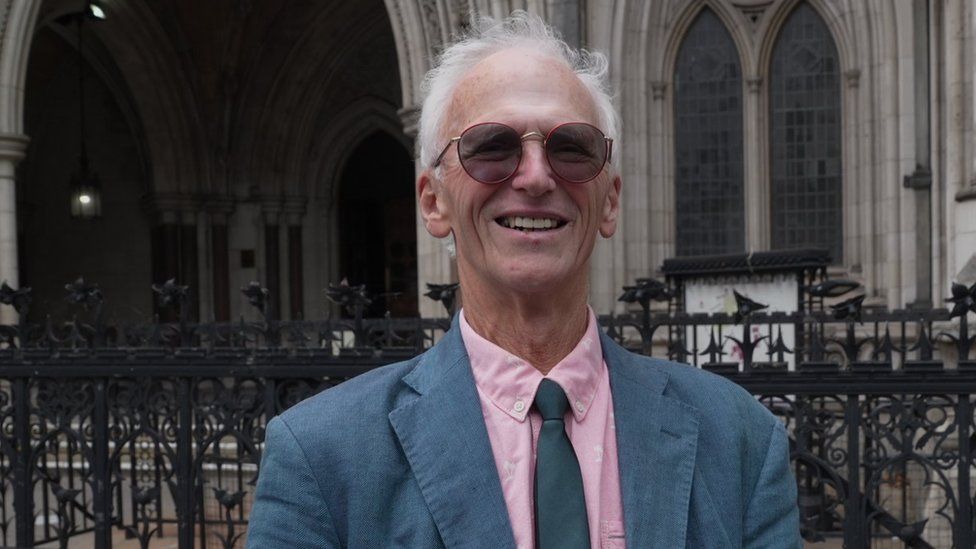 Richard Hawkes was one of five people who were exonerated in July
A public inquiry into the Post Office scandal is putting pressure on the company and the government to speed up compensation payments to victims.

Chair Sir Wyn Williams will publish a progress report in the coming weeks.

If he is unhappy that the Post Office and the government are not acting on its recommendations, he will issue a formal report to Parliament.

The scandal is described as the most widespread miscarriage of justice in UK history.

A public inquiry, led by the retired judge, has been examining the treatment of thousands of sub-postmasters who were made to pay their own money to cover holes in accounts when a faulty IT system made it look like money was missing from their branches.

More than 700 individuals were given criminal convictions. So far, 81 people have had their convictions quashed.

Interim payments of £100,000 have been made to most, but not all, of those who have been exonerated. No-one has yet received a full and final settlement and thousands more left out of pocket are seeking redress.

Why were hundreds of sub-postmasters prosecuted?
Post Office scandal victims to get more money
Former sub-postmaster Richard Hawkes was one of five people who were exonerated in July, 18 years after being convicted of false accounting.

"Now the weight has been lifted as your character is back as it should be," the 75 year-old told the BBC. But while the fight is over to clear his name, Mr Hawkes is just now beginning the process of claiming compensation for a conviction that left a massive financial hole in his life.

After completing community service, Mr Hawkes eventually managed to find a job cleaning laboratory equipment, where he worked until he was 71 years old.

"Somehow we managed to hang onto the house," he said, although he still has a mortgage. It was only at the start of this year that he finally paid his brother back for a sum of money lent to cover debts the Post Office claimed he owed them.

Some 15 months ago, the Post Office and the government as its sole shareholder, apologised to sub-postmasters and promised swift and fair compensation.

However, many are still waiting. Sharon Brown, a former sub-postmaster in Sunderland and mother-of- two, was accused of theft by the Post Office in 2012 and is furious that her compensation hasn't arrived yet.

She told the BBC she has only survived because of the financial support of relatives, including her sister-in-law who took out a loan on her behalf. At one stage, she had to rely on credit cards to buy food for her family.

"I want my life back," she said. "I want to be able to walk about and hold my head up and say finally 'I got compensation because they did me wrong'.

"They've ruined so many people's lives, it's heart-breaking."

A Post Office spokesperson said: "Our priority is to ensure that there is meaningful compensation for victims and that such events can never happen again."

The public inquiry into the Post Office scandal, which began hearing evidence in February 2021, was set up to examine who was to blame for the wrongful prosecutions and why nothing was done to prevent them.

However, Sir Wyn became so concerned about the slow progress of compensation for sub-postmasters that he took special evidence at hearings in July.

Sir Wyn has now decided to publish a progress update in the coming weeks, and will issue a formal report to Parliament if he's not happy those recommendations are being acted on by the Post Office and the Government.

It seemed like that pressure was already bearing fruit as there was good news at the end of June for more than 500 subpostmasters who had previously been excluded from compensation. The then Postal Affairs Minister Paul Scully said a scheme worth £19.5m had been arranged to ensure they did not miss out.

But since then it's been all change in the Cabinet, there's now a new minster for Postal Affairs and victims are worried it'll be yet another delay on their route to compensation.

Jane Hunt, the new Minister for Postal Affairs who replaced Paul Scully, declined to comment on the issue. But she said she looked forward "to continuing [Paul Scully's] excellent work in delivering compensation for postmasters".

Interim payments of £100,000 have been made to most, but not all, of those whose convictions have now been quashed. No one has yet received a full and final settlement, and a former supreme court justice has been asked to give advice to try and break the impasse between victims and the Post Office over how much should be paid.

During the inquiry hearings the Post Office admitted that for those without convictions it had expected hundreds of applications for compensation but had receive thousands, did not have enough staff to process the claims to begin with, and had so far dealt with the more straightforward claims of lower value.

A Post Office spokesperson said "Our priority is to ensure that there is meaningful compensation for victims and that such events can never happen again."
All post by me in Green are Admin Posts.
Any post in any other colour is my own responsibility.
I am using an automatic grammar and spelling app, your original post if quoted may be amended by default. No judgement in your use of grammar or spelling is intended or meant.
Any news stories you can't post - PM me with a link
Top
Post Reply
1 post • Page 1 of 1