Customs and MaltaPost struggle with UK mail delays : Brexit and COVID complicate what was once a simple process

Customs and MaltaPost struggle with UK mail delays : Brexit and COVID complicate what was once a simple process

Brexit and COVID complicate what was once a simple process

Workers handling mail from the UK are having to work night shifts and weekends to cope with a post-Brexit customs nightmare that is being complicated by COVID-19 flight cancellations.

Since January 1, every single item of post from Britain is being checked by customs officials to see if a complicated series of new charges, including duties and taxes, applies.

The new post-Brexit trade deal has turned a ‘once simple five-step process’ of sorting and delivering UK mail into a complex procedure involving up to 18 different stages.

And it is further complicated by COVID, which has slashed flights to and from the UK and means that mail that once arrived every day is now only arriving by truck once or twice a week.

Customers have complained that the knock-on effect of this is a delay in receiving packages from the UK, with people reporting receiving Christmas cards and gifts in February.

A MaltaPost spokesman said it was experiencing delays in the arrival of mail items from the UK and blamed this on the “drastic reduction” in the number of flights from the UK – dropping from 21 flights a week to around three.

“In view of the very limited number of flights between Malta and the UK, MaltaPost is presently receiving mail from the UK via a trucking service once or twice a week,” the spokesman added.

“Trucks take close to a week to drive down to Malta,” he said, adding that they only depart from the UK when they are filled with items, which also delays mail by a number of days.

When the post finally arrives, all items are then subject to stringent controls, and need to be checked to see if VAT, customs duties and customs processing fees apply.

“In view of this additional and lengthy process, MaltaPost has increased its workforce at the Parcel Office to handle the significant increase in the number of mail items that require customs processes.”

A Customs spokesman said e-commerce sales from the UK make up “a significant percentage” of all online shopping imports to Malta.

“Hence, there was a substantial increase in imports subject to Customs control. This could have contributed to a few days of delay in release of goods but not weeks,” he said.

“The Customs Department, in collaboration with MaltaPost, has immediately addressed this concern, by facilitating their sorting process and extending the inspection and releasing hours up to 10pm every day during the week, and by including Saturday as a working day.”

Many posts on social media said people are waiting for parcels, gifts, or items for weeks.

One woman said that she had a registered parcel sent from the UK on 17 December and received it on January 22, yet when she sent something from Malta to the UK, it arrived shortly after one week.

Another man shared a Christmas card which he received on Wednesday, with the date '17 December, 2020', stamped by Royal Mail. 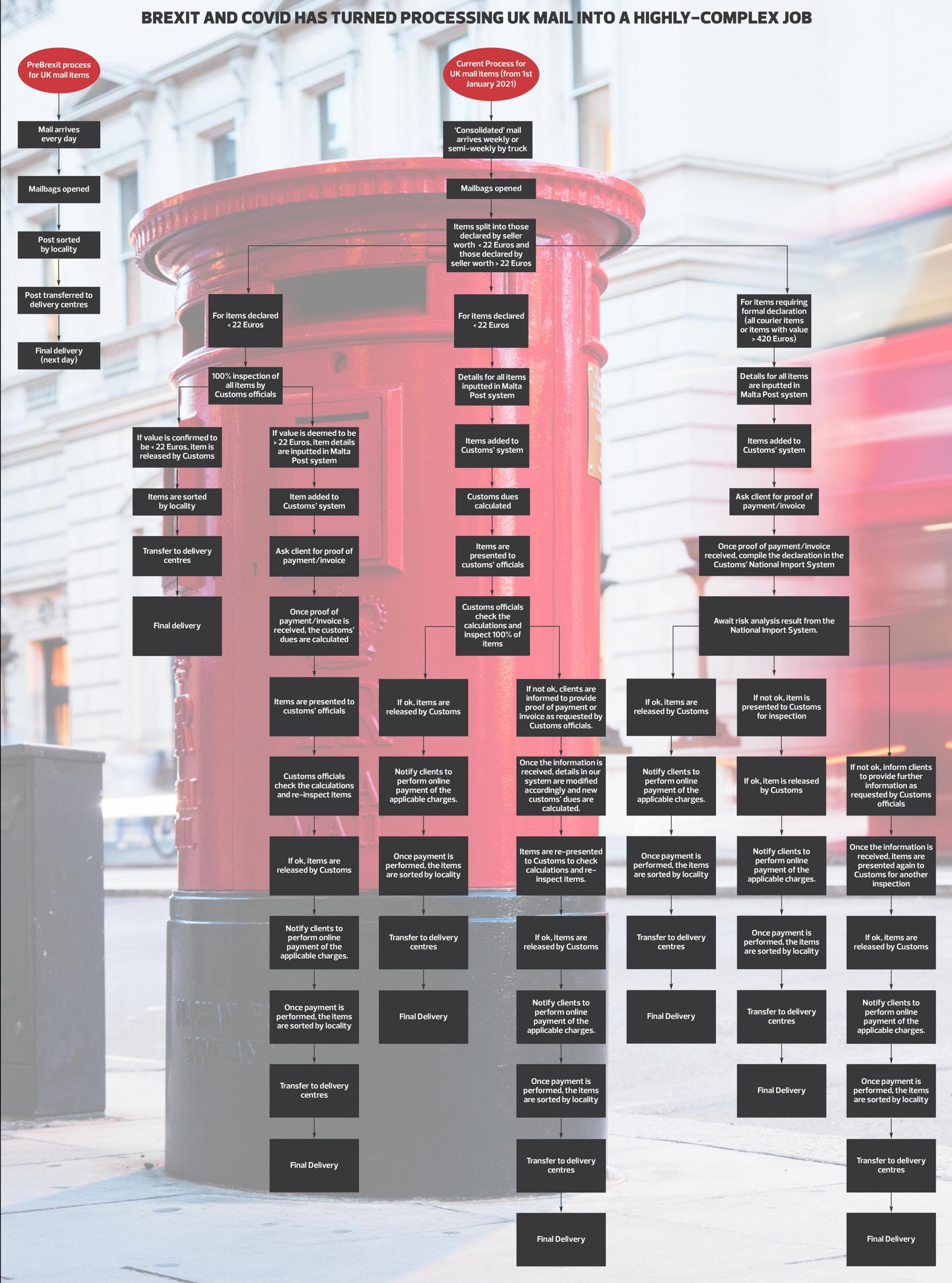 Desktop : Open pic in new tab and zoom in. Phone : zoom in by pinching.
VERY IMPORTANT AND INFORMATIVE CORONAVIRUS THREAD HERE
I'd appreciate it if you did not lift posts from here and put them on Facebook, either discuss the posts on here, or leave here and stay over there.
It's good to get these types of threads, the ridiculous my manager said bollox so we can reassure ourselves that while the world is falling apart, Royal Mail managers are still being the low life c***s they have always been.
Top
Post Reply
1 post • Page 1 of 1

Users browsing this forum: No registered users and 1 guest