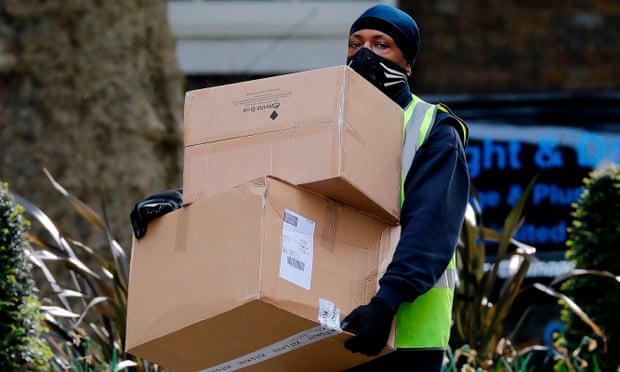 Parcel delivery firm Hermes is creating more than 10,000 jobs as it gears up to cope with the shift to home shopping during the coronavirus pandemic.

The company says it wants 9,000 more couriers, most of whom are classed as self-employed and so not guaranteed the legal minimum wage, full sick pay or holiday benefits. It will also hire 1,500 full-time staff, including some roles at its head office in Yorkshire as well as warehouse workers, managers and supervisors.

Hermes has ploughed £30m into expanding its operations this year, including buying vans and opening depots, as home shopping surged during the high street lockdown.

High demand for delivery services is expected to extend into the second half of the year, with the volume of parcels being handled by Hermes set to almost double to 3.5m a day during Black Friday and the run-up to Christmas – the busiest trading period.

While high street stores including Marks & Spencer, John Lewis and Boots have been laying off thousands of staff, delivery firm DPD has said it would hire 6,000 workers, including HGV drivers, warehouse staff, managers and support staff such as mechanics. The new hires are part of a £200m investment in expanding its next-day parcel delivery service.

Kingfisher, the owner of B&Q and Screwfix, said it would be taking on 3,000 to 4,000 workers, about half of whom would be in the UK, after online sales soared more than 200% in April and May.

Supermarkets including Tesco and Sainsbury’s have also hired thousands of workers to help pick and pack groceries for home delivery. Before the high street lockdown about 7% of groceries were sold online; now it is about 13%.

Martijn de Lange, the chief executive of Hermes UK, said: “The pandemic has expedited the already phenomenal growth of online shopping and we see no sign of this changing. As a result, it is important that we have the right infrastructure and people in place to support this. This is good news for the many people who have sadly had their income affected and we are pleased to be able to support the UK economy with so many jobs at this time.”

He said that in the first fortnight of lockdown Hermes had thousands of applications from pub staff, chefs, dog walkers, hairdressers, pilots and others who had been furloughed or laid off because businesses had been forced to close, and he hoped to welcome more in the coming weeks.

Meanwhile Royal Fail do the opposite :(

Yes, very strange, it looks like RM wants to drive the bussines down...