A Roche man was left confused after an online order delivered by Hermes was sent back to the seller, with the company claiming it wasn't able to deliver the package - to its own delivery point.

Retired livestock haulier and vintage machinery enthusiast Chris Stokes had ordered a box of ten aloe vera juice drinks from online retailer Superfood UK and was taken by surprise when messages from Hermes informed him that, as it wasn’t able to deliver his parcel three times, it would be sent back.

This was despite the fact the delivery address for the package at St Blazey Service Station is a collection point for Hermes parcels.

Chris said: “I’ve ordered the drinks before and they’ve arrived no problem so I’m confused as to why this time the company couldn’t seem to find the garage. Because I live in an area that’s a bit out in the sticks, I get my parcels delivered to St Blazey Service Station as it’s one of their collection points and it’s also where my daughter works.

“There’s usually more than one person at the garage and it’s open from 6 am to 9pm every day so there’s definitely no chance the order wasn’t received. I asked my daughter if anyone had attempted to drop off the parcel and she said no. They haven’t tried to deliver it once, else someone would have known.

“It’s not as if the delivery hasn’t been done before either, it’s the third time I’ve had the same order delivered to the same point and from the same company. I used to buy the aloe vera drinks at Holland and Barrett but unless it was in one of their penny sales it was more expensive and online I can buy them at half the price. I’ve had aloe vera drinks for years.”

The messages Chris received from Hermes with regards to his parcel delivery had changed from "Your friendly local courier will try to deliver between 12:00 and 14:00 today at 12:03pm.

This was quickly followed by two messages in the same minute with the first saying "Your parcel is at a local depot and on its way to you" followed by "Your courier has had an issue with getting to the delivery address. If you have any instructions you think might help, visit the help section and use the contact us page", with both messages coming through at 12:09 pm.

After the company made "three attempts at delivery", the package was sent back. 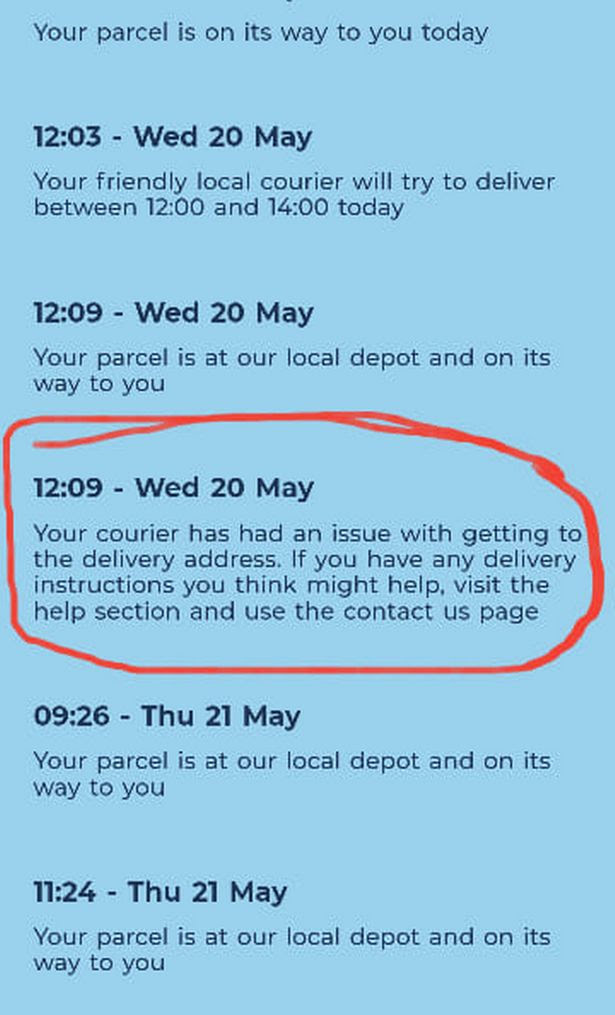 Chris is unsure as to the precise reason his parcel wasn’t delivered, though he suspects it might be due to the delivery driver unsure as to where the location might be.

He continued: “I cannot understand for the life of me and I’m confused as to how they wouldn’t know where the garage is when you consider it’s a collection point. As you drive through St Blazey you can’t miss it - a blind man walking in the opposite direction is more likely to find it, it seems. Whichever way you come over or towards the level crossing it’s right there, you can’t miss it.”

Within an hour of Cornwall Live contacting Hermes for comment, Chris had been offered a £20 goodwill gesture and an apology for the inconvenience, which he accepted.

A Hermes spokesperson said: “We have apologised to Mr Stokes for any inconvenience and offered him £20 as a gesture of goodwill. We have advised that he will need to contact the retailer directly as the parcel has been returned to them."

That`s the only Hermes parcel shop for miles, he must have known about it.
Maybe the parcel was damaged or he lost it or the driver was new?

Too much information is fine when it works. When it doesn't, it just provides loads of ammunition.

You do not have the required permissions to view the files attached to this post.

Depending on what direction the driver was coming from it could be quite easy to miss that sign, way back there. They don't have time to be looking out for small signs like that, way back from the front of the property. There's a railway crossing just a little way down the line so going slow along there isn't an option as they'd risk causing traffic to back up, blocking the railway line

What`s the need for a sign when that`s the only Hermes Parcel Shop in that area?
The driver must have known. it`s like a colleciton driver doesn`t know where the only post office in his area is

Janet Brum wrote:What`s the need for a sign when that`s the only Hermes Parcel Shop in that area?
The driver must have known. it`s like a colleciton driver doesn`t know where the only post office in his area is

Again with a small sign there's a high probability that they'd miss the Hermes sign, especially with other signs. The article doesn't say if the driver was the normal one each time, for all we know it could have been a different cover driver each day

Janet Brum wrote:That`s the only Hermes parcel shop for miles, he must have known about it.
Maybe the parcel was damaged or he lost it or the driver was new?

I thought of that too :)
Too late now anyway...