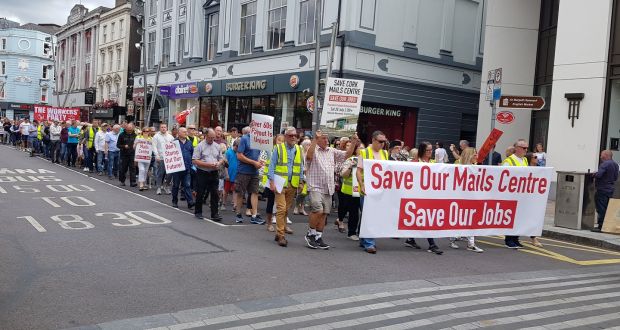 Gardaí estimated up to 1,000 people took part in the protest. Photograph: Barry Roche

An Post mail centre workers in Dublin, Portlaoise and Athlone are being urged to show solidarity with over 200 colleagues in Cork facing redundancy as they will face the same fate as the company seeks to cut costs, a protest march in Cork has heard.

Cork North Central Solidarity TD Mick Barry told the protest march organised by the Cork Mail Centre (CMC) Action Group that all mail centre employees in An Post should oppose what is being planned for the Cork centre.

An Post announced last month that it plans to close the centre in Little Island in March 2020 with the loss of over 200 jobs, citing a global trend in a fall in the number of people sending letters.

According to An Post, the CMC is operating at 25 per cent less than capacity as mail volumes decline at a rate of approximately 7 per cent per annum due to customers moving from letters to e-mails.

But Mr Barry told the protest An Post was intent on closing not just the CMC but also the other centres despite the huge growth in the parcel business and workers employed in any new parcel centre would not enjoy the same pay and conditions.

“It’s a race to the bottom being organised An Post and if any worker in Dublin or Athlone or Portaloise thinks ‘They’re closing Cork, not us,’ then let the message go out loud and clear – if they succeed in closing Cork, then you are next.

Gardaí estimated up to 1,000 people took part in the protest, which saw CMC and other An Post staff as well as members of several political parties including Sinn Féin, Solidarity, the Workers Party and the Communist Party join the march.

Among those to participate were Cork Sinn Féin TDs Jonathan O’Brien, Donnachadh O’Laoghaire and Pat Buckley, who told the rally that CMC closure was a mistake similar to closing the NET fertiliser plant in Cobh and Irish Sugar in Mallow.

John Ahern of the CMC action group urged all An Post staff, who are members of the Communication Workers Union, to attend the union’s AGM in Cork next weekend to back a motion calling on the union not to support the Cork closure.

Mr Ahern said that the CWU leadership had agreed to the Cork move but already 100 people had signed a motion urging the leadership to reverse that decision and he urged others to attend the AGM and vote to reverse the deal.

“Never did I think when I joined An Post in 1992 that those over 60 and those on restricted duties and those with the short contracts would be thrown under the bus with different and poorer redundancy offers than others,” he said.

“We need to tell our CWU that our 240 jobs are not just another day in the office for those up in Dublin – they are jobs belonging to people with real lives and they matter – we need to tell the union and the company that we are not for sale.”

Mr Barry told the protest An Post was intent on closing not just the CMC but also the other centres despite the huge growth in the parcel business and workers employed in any new parcel centre would not enjoy the same pay and conditions.

It’s a global pattern unfortunately, fair play to workers trying to stem the tide but what we really need are governments that recognise this trend and put in place measures - in what’s left of workplaces (for starters, a higher minimum wage to stop this race to the bottom from competitors) and also in terms of welfare, basic incomes, etc - to deal with it. And pigs might fly.