TEAM JUST IN - GUESS WHAT? - I WAS ONCE A KEY WORKER - NOW I AM A GREEDY WORKSHY OVERPAID UNION MEMBER - FEELING BLESSED

AUSTRALIAN POST TO PHASE OUT MOTORCYCLES - REPLACING THEM WITH ELECTRIC TRIKES!

AUSTRALIAN POST TO PHASE OUT MOTORCYCLES - REPLACING THEM WITH ELECTRIC TRIKES!

A staple of the Aussie delivery world, all Honda CT110 Postie motorcycles are to be replaced by an electric trike alternative. 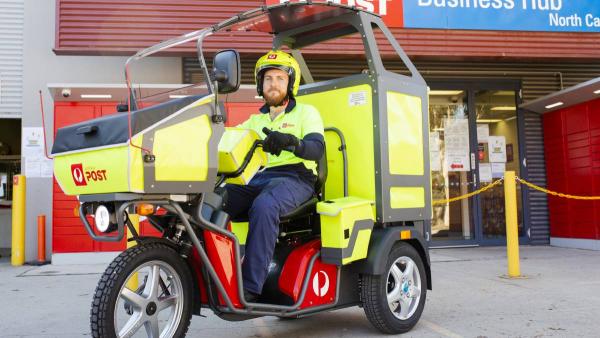 After a number of successful trials that kicked off around 4 years ago, the Australian Post has officially confirmed the electric trikes will take charge for an ‘electric future’ with the beloved red Hondas completely phased out by 2025 at the latest.

Priced up at around £10,000 each, a Kyburz trike is capable of holding around 1200 letters and 100 small parcels at a time (three times more than the CT110 that’s been seen delivering in Oz since the 70s), with a range of around 100 km (perhaps three times less than its contemporary), and recharged to full in 7-10 hours.


That’s a fair increase of capacity compared to the charming little red Postie bikes that have built a bit of a cult following over the years, and for a delivery vehicle capacity is king.

Other than the obvious green eco-friendly benefits, the main reason cited for a switch to a fleet of electric trikes is safety. But there’s more to it than that.

With main benefits including increased visibility when out on a round, riders are also reportedly finishing a shift with fewer signs of fatigue after riding on three wheels over two, and apparently a noticeable drop in accidents when compared to the current two-wheeled option.


Rod Maule, Australia Post safety and wellbeing manager says their fleet of postie bikes have the most accidents of all delivery vehicles down under, so adding a wheel should help reduce incidents. Plus, he noted a benefit of more women being tempted in to the otherwise male-dominated workforce.

According to the Australia Post, via Motorbike Writer, the Kyburz Trikes are a safer option as they can only reach 45 kmh (28 mph) and can be ridden on footpaths, plus can be ridden with car licences in some states.

So it’s a clear win, right? Well not quite. Apparently, some posties have said the trikes can tip over on uneven footpaths, and in 2019 they were reportedly taken off the roads altogether due to front axle concerns. We'd imagine those concerns have now been completely squashed.

In any case, Australian residents can expect a silent whirr of electric motors to be surprising their letterboxes with mail from now on, and it’s more than likely to be a common thread that runs across all countries from here on out as electric vehicles gather pace.

The delivery and service industry will account for a huge portion of vehicles on the roads, and perhaps swapping those vehicles out for electric alternatives could eek a few more years onto the life of combustion motorcycles & scooters? Wishful thinking, maybe… but that 2035 deadline is approaching fast.
All post by me in Green are Admin Posts.
Any post in any other colour is my own responsibility.
I am using an automatic grammar and spelling app, your original post if quoted may be amended by default. No judgement in your use of grammar or spelling is intended or meant.
Any news stories you can't post - PM me with a link
Top
Post Reply
1 post • Page 1 of 1