Competitors and other mail organisations around the world news and discussion.This is an open forum.
Post Reply
4 posts • Page 1 of 1

As Amazon prepares to make £2billion in UK Black Friday sales, warehouse staff have accused the retailer of treating them like “slaves” or “robots”.

We can reveal that ambulances have been called to the firm’s “ fulfilment centres ” almost 1,000 times since 2018, including 178 callouts to its site in Tilbury, Essex, where a male employee died this month.

A whistleblower at Tilbury told the Mirror: “Amazon don’t care about the health of their workers, they treat people like slaves.

“For the first three sick days you don’t get paid – it doesn’t matter if you’re dying or you’ve lost a leg.

“That policy encourages people to come to work when they are not well because they are scared of not being paid or being fired.

“Picking items is relentless, it’s physically so hard on your body and the productivity targets are stressful. It’s all about money.”

Freedom of Information requests to nine NHS ambulance trusts show 971 callouts were made to 24 Amazon warehouses between January 1, 2018 to August 31, 2021, which is equal to up to five a week.

Paramedics treated people who had lost consciousness, or were suffering from traumatic injuries, breathing problems and chest or cardiac pain.

The Tilbury whistleblower claimed that staff were expected to pick up to 380 items an hour during 10-hour night shifts.

A man was found dead at the Tilbury site

The man added: “You are bending down and reaching up – it sends you mad and kills your knees and back all night.”

Another former Tilbury worker said years of manual work for Amazon caused his shoulder to dislocate in 2019.

There were 248 callouts in the first eight months of this year alone, which represents a 24% increase on 2020.

One callout to Amazon’s centre in Rugby, Warks, was recorded as a suicide attempt, while a “suicidal thoughts” call was made at another depot in Rugeley, Staffs. Someone suffered a drug overdose at Rugeley this year.

We can reveal that ambulances have been called to the firm’s “fulfilment centres” almost 1,000 times since 2018

After a worker was found dead in the toilets at Tilbury on November 7, a former employee wrote on the staff Face book: “It was mental when I worked there and literally this doesn’t surprise me at all. The workers there are people, not robots.”

Amazon sales hit £20.6bill­­ion last year, a 50% rise on the previous year thanks to a lockdown boom. The firm paid £492million in tax last year.

Amazon fulfilment warehouses are gearing up for this week’s Black Friday and a busy Christmas, with a massive ad campaign looking for staff.

But once they get behind the high walls of Jeff Bezos’s slick empire, new arrivals may be surprised by working life there. For starters, the trillion-dollar company doesn’t even have a fair sick pay policy. There is no pay for the first three days off sick, unless you have Covid.

There were 178 ambulance callouts to its Tilbury warehouse alone between January 1, 2018 and August 31, 2021. One staff member said working for Amazon was like “slave labour”. A Mirror investigation with the Bureau of Investigative Journalism and ITV News found the firm broke its own rules by using agency workers on zero-hour contracts.

Some of those workers called it “slave labour” too. Oxford University research found Amazon Flex – the delivery arm of Amazon – offered the joint- worst working conditions for gig economy workers in the UK.

Amazon Flex scored zero, meaning that it failed in all categories.

Mick Rix, national officer of the GMB Union, which represents some Amazon staff, said: “In terms of pushing the workforce to breaking point and levels of exploitation, Amazon is one of the most concerning.”

A spokesman for Amazon said: “Once again, our critics are using incomplete information that’s without context and designed to intentionally mislead.

“The fact is that Amazon has 40% fewer injuries on average compared to other transportation and warehousing businesses in the UK.

“The vast majority of ambulance callouts are related to pre-existing conditions, not work-related incidents.

“Amazon’s sick pay is in line with other major retailers in the UK and it’s also worth noting that Government policy on statutory sick pay starts after four days.”
VERY IMPORTANT AND INFORMATIVE CORONAVIRUS THREAD HERE
It's good to get these types of threads, the ridiculous my manager said bollox so we can reassure ourselves that while the world is falling apart, Royal Mail managers are still being the low life ***** they have always been.

If you tolerate this, then your children will be next.
Workplace - The gift that keeps on giving.
Top 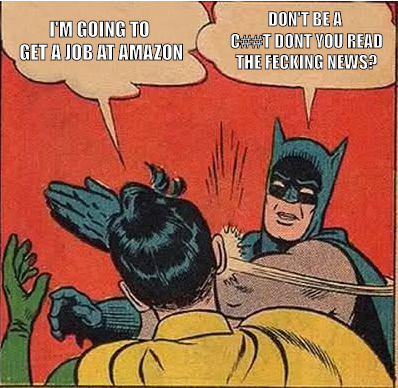 VERY IMPORTANT AND INFORMATIVE CORONAVIRUS THREAD HERE
It's good to get these types of threads, the ridiculous my manager said bollox so we can reassure ourselves that while the world is falling apart, Royal Mail managers are still being the low life ***** they have always been.

If you tolerate this, then your children will be next.
Workplace - The gift that keeps on giving.
Top

So why isn't Mick Rix balloting his members?
CUT OFF!!!
Top

Not exactly news - we all know Amazon treat their workers like garbage - we are not much better to be honest...certainly going in that direction fast !!
Top
Post Reply
4 posts • Page 1 of 1