It's Postman Cat! Parcel-pinching puss jumps up to grab mail from letterbox before stashing it upstairs
Linnet waits patiently by front door of owner Fox Benwell's home, in Cambridge
Six-year-old feline filmed leaping up and grabbing small package with her paws
Fox, an author, took a while to work out how flyers, letters and other post was making its way upstairs before getting to the bottom of the mystery

This is the hilarious moment a cat which loves to wait by the front door for the mail leapt up, grabbed a package and stashed it upstairs.

Footage shows Linnet waiting patiently for a small parcel to be pushed through the letterbox of her home, in Cambridge.

When she feels the moment is just right, the six-year-old feline jumps up and snatches it with her paws.

Knocking the package to the floor, she then gently picks it up with her mouth before heading up the stairs to hoard it. 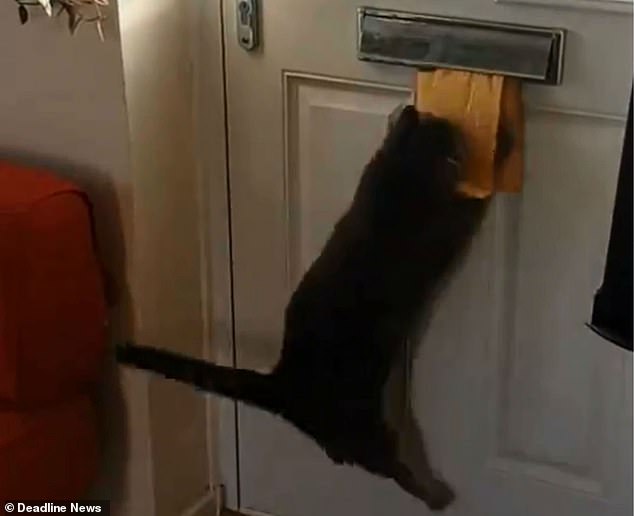 Her owner, Fox Benwell, posted the clip on Twitter, where it has been viewed more than 126,000 times.

The 34-year-old author wrote: 'Internet! May I present to you, ENTHUSIASTIC POST-CAT, who often waits by the door for our postie or those charity-bag drop offs, and stashes all her spoils upstairs.'

One commenter responded: 'I want a mail hoarding kitty' - while another wrote: 'Your cat is my new favourite, what a cutie.' 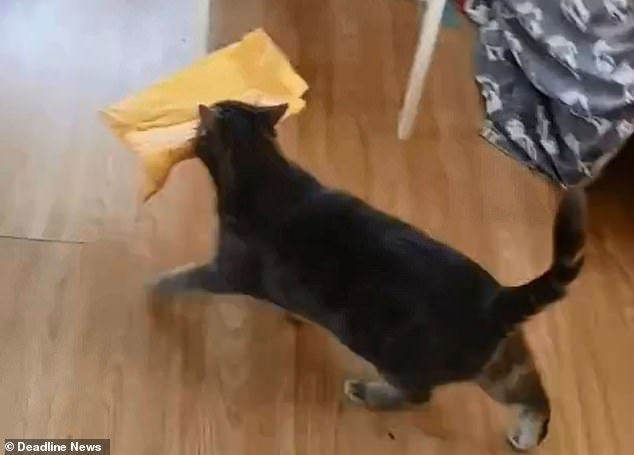 Her owner, Fox Benwell, had wondered why a stack of post had mysteriously been appearing upstairs - and finally now had an answer. Linnet was taking mail up there and hoarding it

Speaking today, Fox said: 'One day, I found a charity collection bag on the floor upstairs.

'It kept happening – flyers, letters, bags – I had no idea how they were getting there, and then one day she did it while I was working.

'She also goes for letters and smallish parcels - anything she can get her teeth into and lift, and she'll often wait by the door for the postie.'

A healthy domestic cat can jump about 8ft high - a distance of around six times their body length.