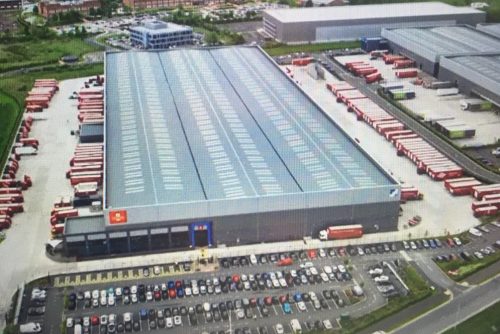 It is the first of two super-hubs, the other being in Daventry, in the Midlands, which is due to open next summer as part of an investment worth a total of £900m.

Most parcels will enter the Warrington hub in roll cages and automated tippers will then tip inbound parcels from these onto a conveyor to enable singulation and sortation to take place.

Both sites will involve a high level of automation in the sorting and processing of the parcels which, Royal Mail, says will enable staff to be reassigned to other tasks.

The investment in the sites is in response to a shift in work patterns for Royal Mail which has seen letter volumes shrink, due to increasing use of electronic mailing systems. Royal Mail now derives more than half its revenues from parcels. 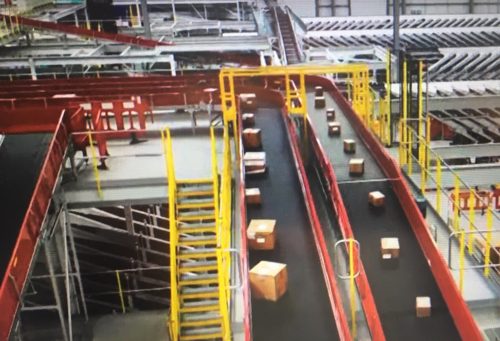 And, in an interview with Sky News, he said Sunday deliveries will play a bigger role in the working week: “We really see massive potential there.

“When we speak to our retailers they’re very interested in that extra day with us,” he said.

The two super-hubs will also significantly increase Royal Mail’s capacity to
All post by me in Green are Admin Posts.
Any post in any other colour is my own responsibility.
I am using an automatic grammar and spelling app, your original post if quoted may be amended by default. No judgement in your use of grammar or spelling is intended or meant.
Any news stories you can't post - PM me with a link
Top

It's already be online for over a week.

Today is a very exciting day in the history of Royal Mail as we unveil our new state-of-the-art North West Super Hub in Warrington. Another important step in our reinvention, we are now a parcels business that also delivers letters.

Our very first Super Hub is going to play a critical role in helping us meet the growing demand for parcels and next day deliveries. It’s all part of our plan to give consumers exactly what they want – being able to order products, very late in the day, to have them delivered the very next day, seven days a week.

It enjoys improved revenue protection and data capabilities, capturing every parcel’s dimension, weight and tracking, enabling us to more efficiently analyse parcel sizes and provide our customers with more information about the journey of their parcel.

This is a giant step forward in our journey to 90% parcel automation by the end of next year.
We can compete and win in the parcels market which will provide the job security you deserve both today and tomorrow.

Here’s some more impressive facts about our new Super Hub:

Measuring 32,000m2 – it’s the same size as 4.5 football pitches
Capable of sorting up to 40,000 items an hour, processing more than 800,000 parcels a day
50% more capacity can be added as we require
1 York despatched every 7.4 seconds
1 parcel processed every 0.09 seconds
1 artic arrives and departs every 96 seconds - 896 artics over 24 hours
Three tracks housed in the hub each move at 4.6mph. Over the course of a night, each track travels 98 miles – equivalent to 3.7 marathons
Inside are 102 staircases with about 1,500 steps in total – almost enough to climb to the top of the Eiffel Tower!

I visited the Super Hub last week and felt proud to see the centre processing live parcels ahead of the official launch.
I’m back in Warrington today to celebrate with the team and host the local MP and media; look out for further coverage on Workplace throughout the day.

Finally I’d like to thank everyone in the project team involved in building this monumental facility. You have all done a magnificent job; a project of this scale delivered on time and to budget is very hard to do.

Walking around last week, talking to many of the team, and seeing how happy they were to be involved was a lovely use of time.
We are re-inventing Royal Mail for the next generations, and today is a great leap forward.
There is more to do. Let’s keep going.

I Wrote
It's good to get these types of threads, the ridiculous my manager said bollox so we can reassure ourselves that while the world is falling apart, Royal Mail managers are still being the low life ***** they have always been.
RM Coronavirus Support
A manager does not have to count such absences (Covid) towards an attendance review, so my advice would be that employees who remain absent in order to protect the health of their colleagues continue to raise this as mitigation as part of the attendance procedure.
Workplace - The gift that keeps on giving.
My BFF Clash
The daily grind of having to argue your case with an intellectual pigmy of a line manager is physically and emotionally draining.
Simon 'Eric' Thompson
Royal Mail " 505th Christmas - still learning…!"
team - tell the truth - be respectful - be open to other points of view - if you are doing these three things, post post post post…
morcomism
Top

"Who knows where the f*** Warrington is?"
It's trending on social media at the moment.
Apparently it's part of Manchester...

What does this mean for large parcels into the delivery office
Office?
Top

I don't know but someone will reply with a post about cross docking.
I don't know what that is either.
Sorry I couldn't be of more help.
Our hair was short we said what we thought
We'd never be scared; never be bought
Top

In Theory , pre sorted "Yorks" from the Hubs arrive at the Inward M C ,Unloaded from the Artic , reloaded to a 600 cf for transfer to the relevant LAT Delivery Office
Top

I don't know but someone will reply with a post about cross docking.
I don't know what that is either.
Sorry I couldn't be of more help.

If you’re referring to not knowing about cross docking ( apologies if not ) that usually happens at the larger sites, NDC was purpose-built for it. Yorks that have been sorted into destinations at Mail Centres will unload on one side of building, and by the time they make it to the other side they will have firstly been separated by region, and then by destination. The lorry that brought them can then take back Yorks that had been Cross Docked earlier to their VOC, or another Mail Centre en-route. In theory a truck could leave YDC with mail for Sheffield, unload there and reload with Cross Docking work for NDC, unload that at NDC, reload with Mail for Leeds, drop that off and return to YDC, possibly with more Yorks for their Cross Docking operation. Sounds like hard work to me !
Top
Post Reply
9 posts • Page 1 of 1